For a few weeks this winter, the architecture school at Syracuse University was occupied by a giant lens. When you stood in the center of the atrium, illuminated by a large skylight four stories above, you looked through a large, fur-lined scoop framed by a broad rectangle eight feet high. Between stepped floor and sloped ceiling was a curving wall punctuated by a small trapezoidal window through which you glimpsed a purple-tinted fragment of face. Forehead and cheeks, a nose and two eyes: Marcel Breuer.

The lens, a small pavilion encasing deep embrasures like those of the Whitney Museum, was part of an installation design that accommodated an exhibition of material from the Breuer archive, which since the 1960s has been housed at the Syracuse University Library. Designed by Jon Lott of PARA-Project, the installation propelled you into a large gallery where more than 120 drawings and photographs, reproduced at full scale, documented major buildings and projects by Breuer and his office from the 1950s to the 1980s. Image enlargements, wall texts and diagonally striped fields of purple, pink, and blue — supergraphics designed by Brett Snyder of Cheng+Snyder — integrated walls and artworks into a color-saturated ambience.

“Marcel Breuer and Postwar America” featured 13 case studies from Breuer’s postwar career as a leading modernist based in New York City but working across the nation and the world. Each was researched and curated by one of the students in a seminar I taught last semester with Museum of Modern Art curator Barry Bergdoll.

We excluded the many single-family houses for which Breuer is famous, along with prominent commissions such as the UNESCO Headquarters in Paris and St. John’s Abbey Church in Minnesota. Of course we left out the Whitney Museum in New York — that would require an entire exhibition in its own right! Since its completion in 1966, Breuer’s best-known building has been one of the cultural landmarks of the city, and a major institution in its Upper East Side neighborhood. Over the past quarter century, various proposals for expansion — some controversial — were prepared by Michael Graves, Rem Koolhaas, and Renzo Piano before the museum decided, in the spring of 2010, to build a new facility downtown along the High Line, leaving in question the future of Breuer’s inverted ziggurat.

Setting aside these well-known buildings, the exhibition focuses on some of Breuer’s less familiar major works. These include educational buildings, churches, housing projects, civic institutions, infrastructure, and communities built or designed for locations primarily in the U.S., but also including Venezuela and France. We grouped the case studies into three thematic sections addressing Breuer’s characteristic use of materials, his role in giving new shape to the institutions of government and civil society, and his contribution to the emergence of distinctively modern communities. Collectively they document Breuer’s singular responses to the needs and opportunities of the postwar era. Or consider the nearly unknown recreational project Breuer proposed for the former World’s Fair site in Flushing Meadows, Queens, after the 1964 exposition had closed. Intended to compete with suburban swim clubs and amusement parks, the new park would have included a drag-racing track and toboggan runs with artificial snow machines. Breuer designed monumental forms in concrete for a stadium and a giant bathhouse that playfully features children’s splash pools, water slides, and a restaurant with windows looking underwater into the pool.

Other projects exemplify Breuer’s sculptural form-making, his precast concrete egg-crate facades, his typological experimentation with Y- and double-Y office buildings, his staggered and corrugated facades of stone and concrete. As with mid-century contemporaries including Paul Rudolph and Eero Saarinen, when you look afresh at Breuer you find that his work unsettles what you thought you knew about postwar modernism. Examining Breuer’s detailing of concrete across several projects makes you realize that different architects used this material in very distinctive ways. You’ll never lump them together as “Brutalist” again. Breuer’s characteristic form-making inspired the installation design. New walls and benches used Breuer’s plan geometries to transform perception of both the projects exhibited and the architecture of Slocum Hall. A bent wall in the form of a deep V slid under the faceted auditorium that occupies the upper half of the gallery. Its angles were echoed, on the other side of a glass wall, by those of a small pavilion simultaneously solid and void, pavilion and window, seating area and viewing mechanism, smooth object and shaggy cave. (Its interior was sloped and mirrored at first, then stepped and fur-lined.) Together, wall and pavilion formed a double-Y that extended the exhibition into the Slocum atrium and pulled passersby through the show.

Artifacts occupied the gallery according to a logic extrapolated from Breuer’s practice of offsetting juxtaposed forms and textures. Drawings and photographs jostled one another on the walls, gravitating up and to the left while avoiding switches, thermostats, and smoke detectors. Diagonal bands of tape formed color-fields that infilled between case studies to mark thematic sections. Supergraphics explicated the show and reproduced enlarged drawing details as well as four portraits addressing one another and the visitor.

By integrating architecture and furniture with supergraphics and wall layouts, “Marcel Breuer and Postwar America” created a geometric and perceptual armature directing attention to the material on display: plans and sections but also perspectives and photographs that show how we might encounter the architect and his buildings. Spectators in a turbine hall. Toddlers in a sandbox. Nuns on a belfry. Construction workers striking the Iwo Jima pose. Breuer sitting backwards on a chair, meeting our gaze. 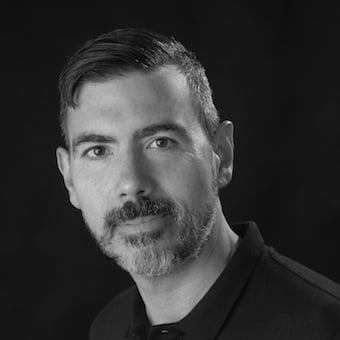 Jonathan Massey is dean of the Taubman College of Architecture and Urban Planning at the University of Michigan.