I think of Burning Man not as home but as nowhere. Nowhere is a place, and it is far from empty. Upon arrival, I am surrounded by giant robots, roving grand-pianos and clowns with air horns on stilts. I am subjected to a soundtrack of nonstop house music emanating from all directions. If I want to sleep (and why sleep, the music begs to ask?), I had better bring ear plugs. Noise complaints? Disturbing the peace? Forget about it.

One reason people come to build this temporary city in the desert is to forego the ordinances and codes that govern life back home. Burning Man has very few physical or cultural boundaries. For architects, who typically depend on constraints to arrive at a form, the great challenge here is to create in an environment where anything is possible. Sure, Burning Man produces some unsightly, sprawling constructions. At night, however, the only thing that matters is how bright are your lights and how loud is your sound. Architecture-as-structure gives way to architecture-as-effect. (Venturi and Scott-Brown would love it.) Hearing about this place of nowhere, my curiosity was piqued. I had to find out what sort of architecture this city could make.

Sound has become my medium of choice for exploring and documenting new places. Recording sound as a means of observing spatial conditions de-emphasizes the visual realm and opens up another dialogue with place, one that is haptic and time-based. Images of a place are formed by listening to sound recordings, but these images are fleeting and ambiguous. Since I have carried microphones to over two dozen countries, I thought: Why not carry them to Burning Man as well? It’s as exotic a place as any I have been to. 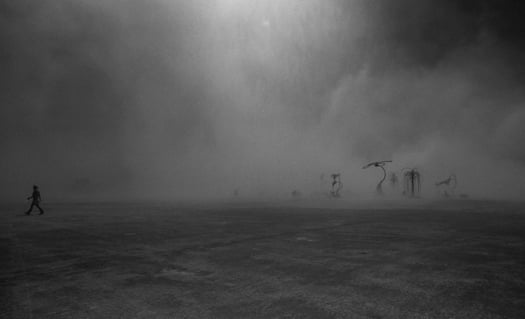 As a trained architect who is familiar with listening to cities composed largely of hard walls, I found myself out of my element out on the playa. Right away I became exhausted with recording because everything was subsumed by the maddening drone from hundreds of amplified sound sources. Subtle sounds that I found interesting — a metal sculpture creaking in the wind, or sand skittering across the desert floor — were rendered muddy when I listened to them on the recorder. That can be a great thing about recording sound: you are often surprised by the loudness of the background sounds that we naturally tune out.

By the end of the first day I doubted whether it would be worthwhile to record anything at all. The task, as I discovered on day two, was finding ways to listen to the noise until it no longer became noise. WWJCD — What Would John Cage Do? This question governed the rest of my week at Burning Man. I tried various strategies. Once, I stood still, eyes closed, as a sea of mad people surged around me. Other times I walked to the furthest edges of the city, until all the sound sources merged into one continuous mass of sound, and I simply listened to its drone.

On day one, I explored the art projects scattered in the open desert, which extend a few miles beyond the camps. I encountered a door with a small porch and wooden threshold. It’s a gimmick standing there all by itself. I felt silly opening this door which separates nothing from nada, but I did it anyway. As you can hear on this track, a bell jingled as the door closes against the threshold. There was no interior; there was no exterior. Therein lies a metaphor for a sonic experience. On either side of the door, there was only a constant, thrumming, merciless sound, the background noise of life at Burning Man. In the second half of this track, you hear the background spectrum of sound amplified, as if you were to occupy an underwater space filled by it.

Burning Man is arranged in a semi-circle around “center camp,” the headquarters of city services, where a circular tent provides shelter from the sun. This track begins with the sound of flags that line the oculus of the giant tent flapping in the wind. I found this sound quite desirable. Next, you hear the full sound spectrum of a diesel generator. Generators are ubiquitous in this desert landscape, powering everything from lights to refrigerators to music amplifiers. Their location — and the lack of a noise screen — is a point of contention between neighboring camps. If the generators could somehow cause flags to flap, or otherwise produce a sound perceived as pleasing, they may not be such a sore subject. The spirit of Burning Man is to take things which are regularly discarded and transform them into something desirable. Sound is one such material, the “waste products” of which can be shaped and designed just as we work with scrap wood and metal.

Burning Man spreads out over seven square miles on the playa, and a beat-up mountain bike is the best way for a sound architect — or anyone else — to get around. The bicycle as a mode of transport contributes a layer to the soundscape. It also permits a cinematic exploration. Yes, sound is everywhere, happening all of the time, but the bicycle is both fast enough to allow you to select your sound experience and quiet enough for you to listen to it. I made a lot of recordings while riding my bicycle and they remain my favorites from the week.

One of the differences between riding a bicycle at Burning Man and riding a bicycle in any other city is the acoustic transparency between city blocks. Because most walls at Burning Man are constructed of fabric, you can hear what is happening throughout the block. This tent city is a retrograde version of our contemporary urban condition where digital peripherals permit a kind of transparency through city blocks. We depend upon prosthetics to discover who is hanging out where, or what band is playing in which venue. That digital transparency happens in the analog at Burning Man.

On the sixth night of the festival, as the giant wooden sculpture known as “The Man” burned, I happened upon an artist who was playing a fire-breathing organ. While the crowds gravitated toward the center to watch the eponymous show, I remained on the periphery, captivated by this 12-foot-tall sculpture and its sonorous butane-fueled blasts. Part percussion, part wind instrument, this flaming organ uses compressed gas controlled by a set of pedals. At the end of this track, you can hear me get my chance at playing it.

Every year artists build a temple that serves as the spiritual center of Burning Man and is the last thing to burn at the end of the festival. This year’s “Temple of Flux” was a 21,000-square-foot walled structure inspired by a desert canyon. During the week people wrote on the temple’s walls and placed items to be burned within it. When the temple began to burn, the crowd fell quiet. I watched and listened from a thousand feet away.

After returning home, I played back this sound recording and was surprised to hear an illusion of distance. The giant burning temple sounded like a pile of logs burning in a fireplace at arm’s reach. This leads me to believe that an entire city on fire would, at a certain distance, sound like the smallest camp fire. Only the cheering that reflects the crowd’s awe gives away the scale of the Temple of Flux ablaze.

As much as I tried to find an escape from the monotonous oontz-oontz of the techno beat, there is simply no structure or envelope of silence to be found at Burning Man. The exception is the dust storms. These roving walls of sand could rise many feet in the air, and they lasted from a few seconds to a few hours. To get caught in one out in the open desert was an opportunity, not a problem. I savored every storm that I was caught in.

All tracks in this audio feature can be downloaded at soundcloud.com/nicksowers. Nick Sowers is a practicing architect based in the San Francisco Bay Area.