When Don Bach was interviewed about his newly acquired residence at 60 Richmond East in Regent Park, Toronto, he expressed unmitigated enthusiasm: “I love this place! it came along at just the right time for me!” he told the Toronto Star, pumping his fists with excitement.1David Hayes, “Living at 60 Richmond: ‘I Love This Place,’” The Toronto Star, July 30, 2010. As Bach described, he’d spent many years moving from one apartment to the other. Now he had a stable new home, and a new job too, as a maintenance supervisor at a nearby Holiday Inn.

Among the first residents of 60 Richmond East, Bach was in many ways the development’s poster child. The cooperative housing was part of the city’s effort to rehouse some of the low-socioeconomic communities who had been displaced by the Regent Park Revitalization Project. Built in 2011 and hailed in the architectural press, as well as in local news and media outlets, the celebrated design promotes collective living, low-cost maintenance, and sustainable development.2“60 Richmond Street East Housing Co-Op,” Teeple Architects website. The eleven-story structure features a resident-run kitchen, a community garden, rainwater irrigation, and an organic composting facility. Its “urban permaculture” earned the building LEED Gold certification, along with ten awards from architectural organizations, as well as the City of Toronto.3Christopher Hume, “60 Richmond Is Toronto’s Best New Co-Op: Christopher Hume,” The Toronto Star, July 11, 2012; “60 Richmond,” Teeple Architects.

Very little press coverage, however, mentioned the history of the site, and the context of its development. Regent Park has historically comprised the largest social housing in Toronto. (Canadians call “social housing” what Americans call “public housing.”) The area was first developed in 1948 as 100 percent social housing for migrant communities then arriving in Canada.4Aadil Nathani, “Revisiting Revitalization: How Municipalities Can Positively Impact Gentrification,” oral research presentation, University of Windsor, UWill Discover Undergraduate (2020), 105. Initially designed as transitional housing, Regent Park ended up becoming a permanent home to multiple generations. In 2017, sociologists conducted an ethnographic study of the original residents. They noted that three-quarters of those surveyed were born and raised in Regent Park, and 80 percent belonged to racialized migrant communities.5Sandra M. Bucerius, Sara K. Thompson, and Luca Berardi, “‘They’re Colonizing My Neighborhood’: (Perceptions of) Social Mix in Canada,” City & Community Vol. 16, Issue 4 (December 2017), 490, https://doi.org/10.1111/cico.12263. The development also housed twice the number of single-parent families as other local neighborhoods. Residents spoke of their communities with a deep sense of belonging. Amal Ahmed, for instance, a 26-year-old single mother and a nursing student at Ryerson University, described the community as tight knit and self-sufficient. “We have mosques here, we have daycare here, we have home care, the doctor’s here. Everything is accessible.”6Zoe McKnight, “Regent Park Residents Find Relocation Unfair,” The Toronto Star, May 3, 2014. Meanwhile Toronto’s public discourse about the area highlighted its concentrated poverty, high crime rate, and violence.7Bucerius, et al., 2.

In 2005, the City of Toronto announced the Regent Park Revitalization Plan, the largest public housing restructuring program the city had ever spearheaded.8Nathani, 4. The stated goals were to deconcentrate poverty and create more racial and economic diversity. Advocates argued that the plan would enhance community health and cohesion, and also attract investors.9Martine August, “Social Mix and Canadian Public Housing Redevelopment: Experiences in Toronto,” Canadian Journal of Urban Research Vol. 17, No. 1 (2008), 94. It followed the Social Mixing model of development, a type of urban restructuring that emphasizes the virtues of mixed income residents — though often, as urban planner Martine August writes, the “subtext” of Social Mixing is “ethnic or racial mix.”10August, 83. The Regent Park Revitalization Plan explicitly stated: “Behavioural patterns of lower-income tenants will be altered by interaction with higher income neighbours. For example, social norms about workforce participation will be passed on to lower income residents.”11Cited in August, 94.

In practice, the Regent Park Revitalization Plan aimed to sanitize and rebrand the neighborhood. The plan divided into three phases of development over fifteen years.12Nathani, 4. It entailed demolishing a total of 2,083 social housing units, to be replaced with 3,000 condos. Of these, just 200 were earmarked for social housing, with 85 of these units at 60 Richmond East. The plan relocated 381 families in Phase One, 440 in Phase Two, and 630 in Phase Three; all were moved to subsidized units in other parts of the city.13McKnight, “Regent Park Residents.” Displaced residents were promised they could return to the neighborhood when construction was complete, despite the fact that the number of available units would accommodate only a fraction of those who were displaced.14Nathani, 4. As Ahmed told a newspaper reporter, “The majority of people that are being relocated are single mothers … for us to be uprooted and told to assimilate … it’s unfair.”15McKnight, “Regent Park Residents.” Most former residents will not return to Regent Park. For those who do — and for those who managed to stay — the area has been transformed. It is no longer home to the close-knit community that so many residents valued.

The Regent Park Revitalization Plan and the accolades for 60 Richmond East promote an image of Toronto as a city that is inclusive, diverse, sustainable, and socially responsible. But what the project really reveals is the city’s paternalistic aspirations for its poor communities. These things are related. As August writes, creating so-called “inclusive” communities often requires controlling the poor.

Since the image of the “liveable city” has become a key aspect of the city’s ability to compete in a globalised, knowledge-based economy … post-industrial cities have a growing interest in marketing themselves as being built on a foundation of “inclusive” neighborhoods capable of harmoniously supporting a blend of incomes, cultures, age groups, and “lifestyles” … [this leads to a] desire to control the most extreme and visible forms of socio-spatial polarization, which diminish the city’s “liveable” image.16August, 91.

The development at 60 Richmond East might lessen the visibility of Toronto’s poor, but it does nothing to address the roots of poverty. Even worse, the displacement required by the Regent Park Revitalization Plan could very well exacerbate the problem by weakening the social fabric of poor communities.

Regent Park is part of a larger systemic issue concerning the ways in which low socioeconomic migrant neighborhoods are treated in a rapidly growing city. These residents feel isolated and disenfranchised when large-scale transformations are implemented without their participation. Many new developments, including that of 60 Richmond Street, actively exclude community input. As the City of Toronto hails the inclusiveness and sustainability of 60 Richmond East, in fact the project only further marginalizes the community it claims to serve. Najia Fatima is pursuing a Master of Science in Critical, Curatorial, and Conceptual Practices at the Columbia Graduate School of Architecture, Planning and Preservation. Fatima also has an independent art practice that engages with themes of occupation, displacement, and geopolitical tensions; her writing, considering how the built environment manifests structural inequality, has been published in various magazines. She earned her B.A. in Architecture and Visual Studies from the University of Toronto. 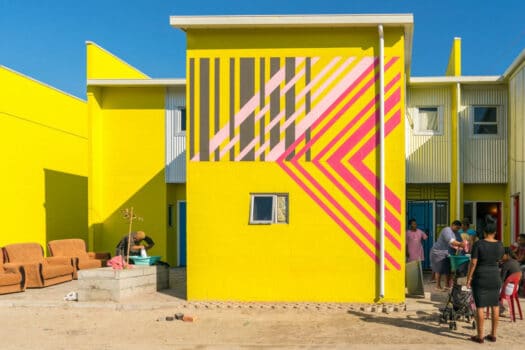