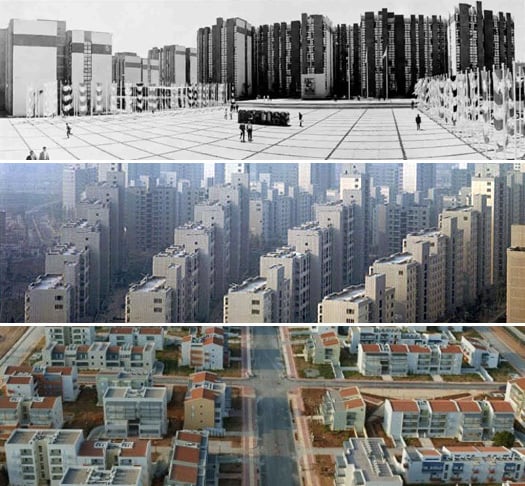 Since the inception of the modern Olympics in 1896, host governments have used the games to make a statement about their cities’ place in the world. Hitler turned the 1936 Berlin Olympics into a platform for Nazi propaganda, and the 1980 and 1984 Olympics, in Moscow and Los Angeles, were proxy sites for the Cold War. In recent decades, mayors have touted global sporting events as a form of urban development: a way of strengthening local industries, enlarging the tax base and subsidizing investment in public infrastructure. While signature stadiums like Beijing’s Bird’s Nest (Herzog & de Meuron, 2008) and London’s Olympic Stadium (Populous, 2012) grab the headlines, the urban form of the Olympic Village is often overlooked.

In the early Olympiads, there was no need for official athlete housing. Only 241 competitors took part in the 1896 Athens ceremonies — a far cry from the 17,000 expected in London this summer. At the 1928 Amsterdam games, athletes were accommodated in spare rooms in boarding houses and aboard ships. The first Olympic Village was built in 1932, in the Baldwin Hills neighborhood of Los Angeles, but it was dismantled after the games and virtually no trace survives today. Not until the 1952 Olympics in Helsinki did host cities began to plan and develop permanent structures for housing athletes. Typically, the buildings were converted to private residences after the games were over, although some became public housing. The mid-century villages are still recognizable, even as their urban contexts have undergone dramatic transformations.

A turning point in the arc of Olympic planning efforts came in 1992 in Barcelona. The city’s strategy of using the games to catalyze urban development projects provided such a spectacular return on investment that every host city since has attempted to replicate it, with mixed results. Boosterism often drowns out the concerns of social justice activists who say Olympic funding supports elite projects over the public good. In Barcelona, for example, the city council abandoned a promise to convert Olympic Village units to subsidized housing. 1 This year, as the Olympics return to London for a third time, Prime Minister David Cameron hopes to cash in: “From tourism to business, sport to investment, we are determined to maximize the benefits of 2012 for the whole country.” Exactly how this vision will pan out is uncertain, but that hasn’t slowed the elaborate redevelopment plans already underway for the 2016 games in the Barra da Tijuca district of Rio de Janeiro. Anisha Gade is currently pursuing dual masters degrees in city planning and architecture at the University of California, Berkeley.