Wander into the Marlborough Gallery in Chelsea this fall and you will encounter in rapid succession an inner-city swap meet, a ca. 1960s hotel lounge, an array of over-decorated living spaces and what look like abandoned shops, with empty display cases and bare walls. Welcome to Floating Chain (High-Res Toni), the latest exhibition — part fun-house, part anthropological diorama — created by the artists Jonah Freeman and Justin Lowe.

As in their previous collaborations — which included interpretations of a Chinatown bazaar, an off-track-betting parlor, a pirate radio station, a plastic surgery clinic, and, most notoriously, a meth lab — the duo has here imagined a sequence of fantastical ruin-worlds. We visitors must navigate these immersive worlds via disorienting passageways and rough holes sledge-hammered into walls. Each chamber is a sort of “set” and our movement through the sets suggests a dreamily cinematic narrative, albeit a disjointed one.

How fitting, then, that the latest installation includes a small screening room where a short video is playing. Also created by the artists, the video is a psychedelic faux-ethnographic study that describes — through random association and stream-of-consciousness narration, a.k.a., a floating chain of signifiers — various personalities (plastic-surgeried celebrities, drug addicts, global travelers), places (a model of a glass and steel city, a living room with overstuffed furniture, a store with rotating racks of garish shirts), and products (outdated stereo components, engineered food, xeriscaped yards, German techno, ubiquitous screens), all of which exemplify aspects of modern living. The film, like the installation, glides from one constructed scene to another, and in doing so makes us aware that so much of our “reality” is based on the artifice of color-corrected images and green-screen film sets. Freeman and Lowe offer us a sort of archaeology of modern living. On acid.

A few months earlier, in another part of town, you might have encountered yet another installation with archaeological undertones. Breaking Ground, an exhibition of Allan Wexler’s work at the Ronald Feldman Gallery, featured a series of “prints” of what in some cases looked like archaeological digs (if the excavators were alien beings), and in others like proto-dwellings, primitive scaffolds, or rudimentary engineering. The mood of primordial exploration was heightened by the titles of the prints — “Grounded,” “Earthwork,” “Gravity,” “Bridge,” “Ascension,” “Ramp,” “Repair,” “Rock Bottom” — which allude to fundamental actions and phenomena in the creation of built space.

Wexler refers to these prints as “photo-based works,” and they are painstaking constructions: the artist builds a plaster model; photographs it; digitally manipulates the photo; prints it at 10×10; draws on the print; mounts the print to a wood panel (or even a hollow-core door); applies matte medium and wax; and buffs. As a final touch, the corners of the image are darkened, or “vignetted,” to make the print appear antique. Through this labor-intensive process the works appear both painterly and sculptural. As such they involve a layering of production techniques and make manifest the protocols of making; and like the architectural structures they depict, the photo-works are striated and engineered constructions. They also continue what those who have followed Wexler’s career will know to be his sustained focus on elemental building forms. For almost half a century the artist, who has a master’s degree in architecture from Pratt, has again and again explored the fundamentals of architecture, the basic necessities of shelter and daily life — the 2×4, the hut, the table, the chair. As Wexler has said about his work: “I feel I am reinterpreting and perhaps updating Vitruvius’s The Ten Books on Architecture and Alberti’s On the Art of Building in Ten Books.” 1

Wexler thus presents his “invented history of architecture and civilization” — in which he invites us to “see the ancient in the contemporary” — through layered and juxtaposed media formats in which diverse materialities and temporalities get all entangled. As an archaeologist Wexler digs deeper than do Freeman and Lowe, merging the found and the manufactured, the natural and the engineered. For two sculptures shown in Breaking Ground, he reworks tree branches to create faceted constructions which, from certain angles, recall Gothic groin vaults. In “Shelter” — which looks also like a pterodactyl fossil — the voids between the branches are filled with intricately jointed plywood, and the structure is propped on two sawhorses. In “Adam’s House in Paradise” — a reference to Joseph Rykwert’s book on the primitive hut — the negative spaces are filled with cut and folded museum board, and the delicate structure is held aloft on metal stands. Both sculptures distill the processes by which a natural resource is transformed into a building material, and in turn into architecture. To be sure, these are highly abstracted and even platonic works of art; they do not invite imaginative inhabitation. But in conversation Wexler suggested to me another reading: that the power of abstraction is that it can open the works to myriad readings — like finding figures in the clouds. 2

Contemporary artifacts staged as dioramas, as if embalmed; primordial images and forms presented as ruins: Floating Chain (High-Res Toni) and Breaking Ground would seem strikingly different in tone and subject, yet both these recent shows explore a growing interest in what we might call “speculative archaeology.” In fact archaeology, as a kind of model or metaphor, has been surfacing quite a lot in art practice and design theory. A decade ago, in an article in October, the critic Hal Foster identified an “archival impulse” among contemporary artists — like Mark Dion, Thomas Hirschhorn, and Tacita Dean — who “seek to make historical information, often lost or displaced, physically present. To this end they elaborate on the found image, object, and text, and favor the installation format.”

This impulse was powerfully evident in the recent exhibition Way of the Shovel: Art as Archaeology, at the Museum of Contemporary Art, in Chicago, which explored how diverse artists are grappling with the phenomenon of breaking (or broken) ground. Some of the work, like LaToya Ruby Frazier’s photographs of derelict structures in post-industrial Braddock, PA, has been popularized (and maligned) as a version of ruin porn. Other projects, such as Mark Dion’s “Concerning the Dig” and Cyprien Gaillard’s “Untitled” — which consists of rusted excavation buckets showcased in vitrines — display the artifacts of “field research” to explore how detritus is turned into archaeological treasure and how ruins are transformed through preservation. Gaillard’s work was the subject of another recent show: in Today Diggers, Tomorrow Dickens, one room was filled with excavation heads — huge shovels used in mining and demolition — and another with display cases containing small sculptures made from old issues of National Geographic, which for more than a century has been the bible of the armchair explorer.

Extraction is also a central theme of such events as the DredgeFests, the annual symposium/field expedition/design workshop sponsored by the Dredge Research Collaborative, a group of landscape architects who study “human sediment handling practices,” and the recent “Lines and Nodes” symposium at New York University, which examined diverse representations — films, photographs, sound works, maps, etc. — of “resource extraction, its cultural geographies, and the infrastructures that support it.” 3 We might look also at photographer David Maisel’s 2013 series “The Fall”: invited by the city of Toledo to participate in a group exhibition celebrating the fourth centennial of El Greco, Maisel responded with aerial photos that capture the alien landscapes created by resource extraction.

I might draw parallels, too, to the growing interest in “forensics,” including, for instance, Allan Sekula’s practice of “counter-forensics,” through which the evidentiary power of photography is used to give individual identities to the victims of mass atrocities. 4 There’s also Eyal Weizman’s “forensic architecture,” which uses various spatial media to provide evidence — of drone strikes and environmental violence, for instance — for international prosecution teams or political organizations. 5 Finally, digital forensics, as practiced by scholars like Matthew Kirschenbaum and artists like Cory Arcangel, involve “reverse-engineering” erased, corrupted, endangered, or obsolesced media technologies. 6 This work is aligned with yet another reframing of archaeology: media archaeology, a materialist, non-teleological approach to considering media history, and making new things from history’s detritus. 7 We see such an approach reflected in Wexler’s work — particularly in the sheer variety of media formats and the myriad epochs in art and media history that were present in Breaking Ground.

These archaeological projects serve to connect us to the material dimensions of our (often) virtual lives, to the deep histories beneath our presentist and futurist orientations and our “innovation” obsessed enterprises; in the case of both Freeman and Lowe and Wexler, the work connects us also to the ontological roots of our contemporary spatial practices. Financial collapse, climate change, growing alarm about increasingly unsustainable processes of manufacturing, construction and waste disposal — to name just a few of the wicked problems which beset us — have also inspired some of these deeply historical, materialist approaches in art and design. The sensibility is longue durée and the emphasis is non-anthropocentric; and much of this work is undergirded by a strong sense of ethical responsibility and historical consciousness — it is self-consciously participating in a grand trajectory, which gives it a kind of gravitas. In this light we might see the New Archaeology as the new neo-classicism — but deeper.

Throughout his career Wexler has returned to the “first principles” of architecture, reflecting upon the meaning of shelter and space for sleeping, cooking, eating, bathing, reading, etc. He has long examined the genealogy of building and dwelling. Freeman and Lowe’s work explores a more proscribed late-20th and early-21st-century timeframe but they, too, expose the rituals of late modernity: eating (factory-made food), ceremony (screens and drugs), grooming (plastic surgery), gambling, shopping.

But all of these projects are more than genealogical. They’re also, as we’ve seen, archaeological — in philosophical as well as metaphorical ways. The archaeology of Freeman and Lowe, and of Allan Wexler, focuses not only on the “dig,” on the ur-structures of spatial practice, but also on archaeology as practiced by the philosopher Michel Foucault — that is, as a historiographical approach that decenters the subject, that looks beyond what is consciously perceived and constructed in order to expose the underlying rules and hidden structures — the epistemes — that delimit the realm of thought. These artist-archaeologists, through their psychedelic dioramas and otherworldly digs, speculate as to what those hidden structures might be. By “breaking ground” — or, in Freeman and Lowe’s case, by breaking walls — we can perhaps glimpse those primitive infrastructures. Perhaps we’ll discover that the fundamental structures aren’t only the ramp, the bridge, the standardized brick, the modernist grid, the elements of architecture. They’re also the green-screen and the floating chain of signifiers. There’s room for both the primitive hut and the meth lab. 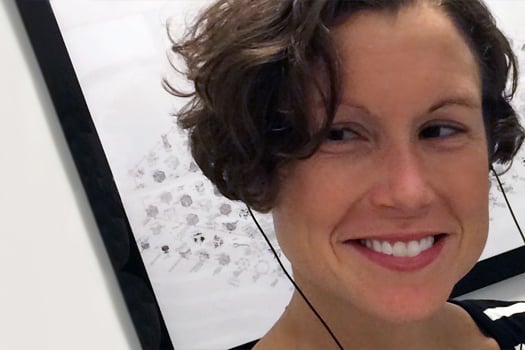 Shannon Mattern is a contributing writer for Places. She is a professor of anthropology at The New School in New York City.