For two decades David Clements has roamed the neighborhoods of Detroit, looking at the city from multiple perspectives: as advertising agent, film location scout and photographer. He has discovered a style of folk art signage unique to Motown, that city obsessed with automobiles and music. The story of Detroit is well known — a top-tier industrial capital, now depressed and underpopulated — and it has given rise to an entire genre of urban landscape photography typified by books like The Ruins of Detroit. What’s missing from all the photographs of abandoned train stations and decaying ballrooms is some acknowledgment that there are people still living in the city center — 900,000 of them — and they have something to say.

Social and economic forces over the last 30 years have produced an urban core that is mostly black, Latino, Arab and Asian-American, surrounded by a sea of mostly white suburbs. The Detroit metro area’s 3.5 million suburbanites drive to the city regularly but spend little time on the streets. Clements’s photography captures messages sent by city center residents to those who pass by in automobiles. In this slideshow, he focuses on signs and murals that employ religious-infused script to proselytize, or hyperbole and humor to advertise. The folk artists who create these murals, signs and graffiti are often anonymous, but they are sometimes recognizable by their style or signature.

Storefront churches advertise themselves as “An Oasis of Comfort in a Desert of Calamity,” guaranteed by specific pastors and offering incentives such as van pick-up for services. One personal testimonial declares, “I Gather Brotherhood to Wait out the Cold,” over which a revisionist has written “Sisterhood.” But not all the messages are about impending Biblical doom. The writing on the wall includes the Tasmanian Devil and his 100% Whoop Ass Ball Cleaner, as well as the shoemaker’s elves from a previous era who bear witness to the city’s German and Irish heritage.

Most telling is a solitary placard nailed to a utility pole in an empty urban field. The pole casts a shadow like a finger pointing to the remains of an abandoned industrial building topped by a dysfunctional water tower. It has only one word of advice: “Evolve.”

David Clements’s photographs were also featured in Borderland/Borderama/Detroit, a three-part essay by Jerry Herron, published on Places in July 2010. 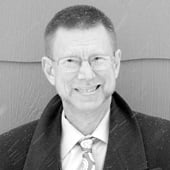 Douglas Haller is a photographic curator, archivist and historian, and a native Detroiter.