I’m one who thinks long and hard before using the word “unique,” an idiosyncrasy not necessarily shared by fellow researchers of New Orleans and Louisiana. But I do not hesitate to use that word to describe the underlying physical geography of this region. The Mississippi River Deltaic Plain is sui generis on the North American continent for the sheer dynamism and fluidity of its origins. The Delta began to form seven thousands years ago, as melting ice sheets delivered immense quantities of sediment-laden water down the Mississippi Valley. As the river disembogued into the relatively placid waters of the Gulf of Mexico — near what is now Baton Rouge — it dumped its alluvium in such volumes that the deposition broke the sea surface and created new land. The higher the deposition rose, the more the current flowed around it, which created additional land.

Occasionally, breaks in the banks would allow more and more water to find a steeper and shorter gradient to the sea, such that the entire channel, every millennium or so, would lunge in that new direction, creating yet more land in wholly new areas — including what is now New Orleans. More frequently, springtime high river water would spill over the banks and spread additional sediment upon the emerging deltaic landscape, raising it higher while pushing back the sea with vegetation-enriching dosages of fresh water.

The sight of the delta processes in action amazed observers. In 1828, one visitor described the delta as “half fresh, half salt, and filled with bars, spits, keys, and … shoals,” its riverborne sediments “silently pushing themselves into the sea, and raising the bottom to the surface.” French geographer Elisée Réclus, in 1853, compared the river to “a gigantic arm projecting into the sea and spreading its fingers on the surface of the water,” a metaphor picked up by John McPhee, who in 1989 described the lowermost river as jumping “here and there within an arc about two hundred miles wide, like a pianist playing with one hand.” The ever pithy Mark Twain called the region “the youthfulest batch of country that lies around there anywhere.” 1 In a word: unique.

The sight of the delta processes in action amazed observers: ‘a gigantic arm projecting into the sea and spreading its fingers on the surface of the water.’

Geologically, southeastern Louisiana is one of the world’s biggest and best examples of a fluvial delta, where a particularly powerful river overwhelms the ability of the sea to sweep away its depositions. For this reason, the “toe” of Louisiana’s “boot” protrudes into the Gulf of Mexico, far beyond the bight of the Gulf Coast. Contrast this river-dominated scenario with the more common wave- or tide-dominated deltas, where the sea wins the battle and the resulting depositions are more or less flush with their coasts. The relatively weak longshore waves that do sweep across the Gulf Coast have had the effect of pushing some deposited sediments westward, forming long narrow ridges favored by oak trees (chenier in French). This is today’s south central and southwestern Louisiana — the Chenier Plain. This and the Mississippi River Plain together form the “sole” of Louisiana’s boot, and what they derived from was purely unconstrained fluidity.

All of which was anathema to French colonials. Rejecting the indigenous strategy of inhabiting the delta, which was to move inland when high waters came, colonial engineers in 1719 began to construct levees, embankments, canals. Over time, under American dominion, these interventions — which made rigid what had once been fluid — would grow larger and more sophisticated. All along the river there rose floodwalls, pumps, weirs, gates, control structures. Thousands of miles of canals were excavated throughout coastal Louisiana for the prosperous navigation and oil and gas industries, which then proceeded to enrich local coffers.

The levees along the Mississippi restrained its ability to overtop its banks or jump channels, and in doing so they enabled a society to flourish here. We would not have New Orleans otherwise. But they also deprived the delta of fresh water and new sediment, while the canals allowed salt water to intrude farther inland and while metro New Orleans sunk below sea level on account of swamp drainage. Add to this other landscape-altering factors (e.g., sedimentary faults, the extraction of petroleum, and the vegetative damages of invasive nutria) and the result was dramatic: the loss of almost 2,000 square miles of coastal wetlands in a single human lifetime. In effect, we have converted a river-dominated delta into an increasingly wave-dominated delta: a landscape that is now sinking and shrinking in the face of rising seas.

The crisis is as sadly unique to the modern North American landscape as the original natural phenomenon was to the prehistoric continent. What is also unique is the poignant beauty of the delta today — a beauty that tells stories of a vibrant past and a highly uncertain future in a place on the true front lines of climate change.

Faith, irony, humor, and a bit of eccentricity make cameo appearances in Virginia Hanusik’s photographs. So does hope.

This is the landscape explored in Virginia Hanusik’s photographic series Backwater. Note, for example, the dead oak and cypress trees, victims of encroaching salt water. Or the massive concrete floodwall, a fortress by any other name, and the expanses of blue sea water on the other side, much of which would have been vibrant marsh just a few decades earlier. Note the hyperbolically elevated homes, except that they’re not hyperbolic at all, but just high enough to evade a Katrina-like surge. We also see remnants of closed stores; a “dead end” sign on a paved street beyond which there is encroaching water; and a crucifix standing in the salty waters of a ca. 1960s navigation “improvement” which, in the storms of 2005, would kill hundreds of people.

Faith, irony, humor, and a bit of eccentricity make cameo appearances in Hanusik’s photographs — “Jesus Christ Reigns Over Grand Isle,” a.k.a., the fastest-sinking land in Louisiana; the “Welcome Survivors” message; and that preposterous castle. So does hope, for the very phenomenon that created this delta still flows through it, and if tapped properly and abetted with new sources of sediment, could be marshaled to save it.

Resuscitating the Mississippi Delta through a network of river diversions and sediment siphons would constitute the world’s largest coastal restoration project. It would take local sacrifice and national will. It would be a moonshot, and it would be unique in our nation’s history.

But then again, in this “backwater,” unique has been known to happen. 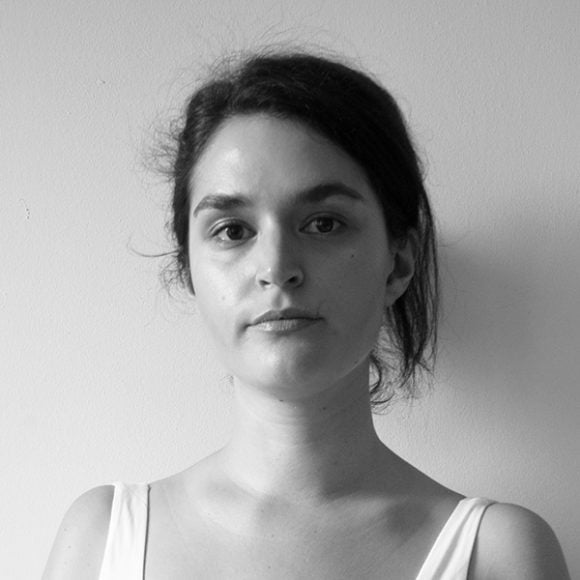 Virginia Hanusik is an artist whose work focuses on landscapes impacted by climate change.